Visitors attending a rabbit show often come out of the experience with no idea of what actually happened, LOL. There is very little fanfare or discussion/direction going on on behalf of the judges or exhibitors at these events, so many people leave feeling confused as to what took place, what happened during the judging, and who exactly won in the end:).

This is the way a rabbit show works:

Early on the morning of a show the showroom opens early to allow breeders to enter, get themselves and their animals set up, and check in. Once the designated hour of the show comes around, the judges put on their showcoats and stand behind the row of cubbies that has been reserved for the breed/s that they will be working with that day. The exhibitors identify the table that they will be showing at, park themselves nearby with their animals, and the show begins.

While the judge stands behind the table to examine animals, a person called a "writer" sits next to him at a small table with control sheets and comment cards to write down the judge's comments for each animal and to record the winners of each class and BOB/BOS (BOB stands for "Best of Breed" and BOS stands for "Best Opposite Sex").

When the judge is ready, the writer calls for the first class to be brought up. In Angoras this is normally the "White Senior Buck" Class, so everyone who has entered WSBs brings their animals up and places them into the cubbies. Before placing the animals, the judge first checks all the entries for DQs. A DQ may include such problems as white or mismatched toenails, white spots or hairs in a colored coat, malocclusion, genital defects, signs of illness, or undesirable characteristics that are unique to each breed. Once the judge has finished the preliminary check, then he/she goes on to evaluate each animal in more detail, checking type quality, wool quality, overall balance, and so on. Once this is finished, the judge then places each animal in a cubby in the order of it's placement (This is not required but it is the method they often use to keep track of everything), and the last place animal is taken out first. The ear number of the animal is read off for the writer, the placement is given, and comments are recited as to what the strengths and weaknesses of the animal are. The animal is handed back to the owner, and the next-to-last-place animal is taken out. The routine is repeated, and the animal is handed back to its breeder again.

By the time the judge reaches the first place animal, he/she goes through the same routine again, reads off the ear number, gives comments, and then puts the class winner off to the side in a cage behind the table or in a cubby on the end if there is room. The next class is then called up, and the entire cycle repeats itself with the judge evaluating each new animal until another class winner is selected. The order of classes in the Angora breeds is usually judged as follows:

Once the White classes have been judged, the judge will then choose an animal for BOV (Best of Variety) and BOSV (Best Opposite Sex Variety). These two animals will remain on the table until the Colored classes are concluded so that a winner can be chosen between the White BOV/BOSV and the Colored BOV/BOSV. Once the Colored classes are finished and the Colored BOV, etc. have been chosen, then the judge will compare the 4 winning animals to determine which is the Best 'Overall', and that animal will be awarded BOB--the Best of Breed. The judge will then choose the best opposite sexed animal for BOS, and the judging is over. The BOB animal is entitled to advance to the BIS (Best in Show) table at the end of the day, but the show will be over for the rest of the animals that were entered.

In Angoras the winning rabbit is almost always a Senior Doe simply because does are larger and normally have superior coats and wool balance. The BOS often works out to be a Senior Buck, though it has certainly occurred that a buck has won BOB or a junior buck or doe has won BOB over a senior animal. Judges have individual opinions and preferences as to which animals are the best, of course, and one thing you can be positively certain of is that the results of one show will almost never be the same as the one that came before it. There are some judges out there who are extremely capable with Angoras and take the time to honestly evaluate them, while others have an active dislike or grave lack of knowledge with them (unfortunately).

People may ask, "Well, if you can never get the same result in each show then how will you ever learn what the quality of your animals is to begin with?" That is an excellent question and the answer is that you can't know after attending only one show with one judge. The proof in the pudding comes when one or more of your animals consistently does well, or consistently places in the top 10, 5, or 3, or gets similar comments day in and day out from different judges. The value of a show (and the reason they were invented to begin with), is to give breeders the chance to have their stock evaluated by a neutral and independent source that is a proven judge of rabbit quality. Everyone who raises livestock knows that 'barn blindness' is a standard problem among breeders, so it is critical to have animals seen and evaluated on a regular basis.
Posted by Anonymom at 5:37 PM No comments:

I spent most of this (beautiful) day doing barn work and moving bunnies around, and then we went ahead and processed 21 fryers so there aren't many brain cells left to think of something interesting to write tonight (grin:).

Due to this unfortunate case of brain-freeze, then, I have decided to re-post some interesting links that I found for the UARC list today in response to a discussion going on regarding the Chinese Angora. UARC members were discussing the difference in quality between Chinese wool found in the stores over here and that which is sold by individual breeders on a smaller level throughout the rest of the world. This first link below is really a history of the Angora rabbit in various regions (as told by one writer---there are really many different versions of this 'origin' story:)). The last two links are detailed accounts of the Chinese Angora itself, which is said to be a cross between the French Angora, German Angora, and New Zealand White meat rabbit.


Anyway, hope you enjoy this, and I hope that the weather is cooling off in every area to get that wool growing out again!
Posted by Anonymom at 7:30 PM No comments:

This Saturday I traveled up to the NYS Convention with 7 rabbits in tow (6 for showing). The NY Convention (or Grand Finals, as it is also called) is always held in Syracuse, NY at the NY State Fairgrounds complex which is very large and which is where an ARBA Convention was actually held many years ago.

I had just 2 Seniors to bring since most of my showbuns had been bred over the summer (and several had needed double clipping due to the heat), and I brought 4 junior does.

There were 43 French entered in each show with approx. 6-7 exhibitors. The judge for our first show was Scott Wiebensohn, and the judge for the second was someone we rarely see in these parts named Susie Dapper.

In show A, my REW Senior doe Zsa Zsa took BOB and earned her 6th leg, while my Junior doe out of Carmen (Spang's Evita) took BOV colored. In the second show, none of my rabbits placed at all in any class and generally went home winless, LOL.

Below are a few pics snapped in between showing and snoozing in my chair (I was in a total stupor most of the day due to only having slept 6 hours the previous two nights, LOL). The first is a general picture of the show hall as it was filling up in the afternoon. This is a very large building with aisles and aisles of cooping for exhibitors to 'store' their buns in for the weekend. 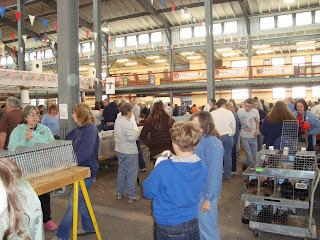 This is an adorable little fuzzy lop that was waiting to go to the table on the roof of someone's stroller:). 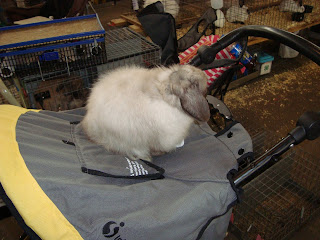 These were my bunnies in their carriers waiting for Show B: 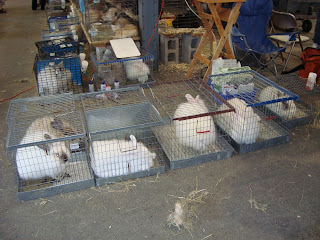 This is Lorrie taking care of bunny sales between shows: 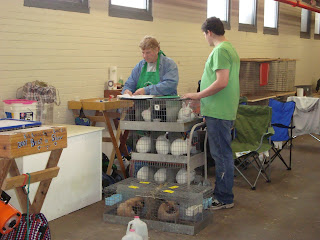 This is one of the colored French classes being judged in Show B: 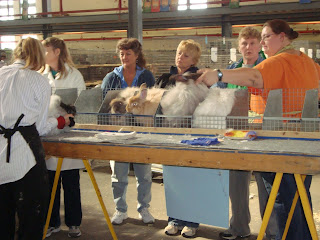 And this is a cute picture of Robin Gottung holding her little EA before judging. Robin also breeds and shows Brittania Petittes. 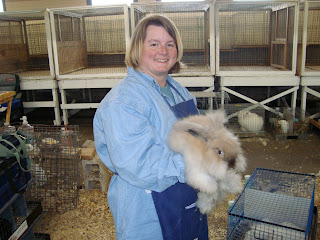 Anyway, so that was it for the weekend:). The next show to concentrate on will be the PA Convention in Lebanon in Feb, and until then I will be breeding, grooming, clipping, and breeding some more:-).

Have a great week!

Posted by Anonymom at 5:27 PM No comments: