Well, it's impossible to predict the weather, but it does seem as though this summer is going to be a hot and early one, if only because we haven't had much rain and we've already had 1-2 days of near 90 degree temps here by mid April:(. I took my fans out and dusted them off today, and now they are set up in the bunny shed and ready to go. The next thing to do will be to fill up soda bottles and freeze them, and I have already decided that I will begin a policy this year of keeping absolutely everyone bald the entire summer with the exception of show bunnies coming into coat and possibly a good wooler or two whose wool I will grow and sell to a spinner here who uses it for her local business. The Giants especially do not handle the summer well, and seeing as how my schedule has become busier over the last year or two, there is no point in fighting with coats if it isn't necessary. 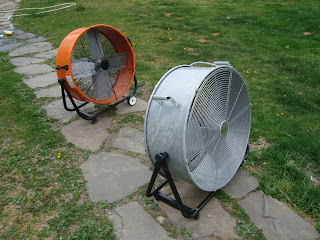 It has been a productive week here in terms of litters. Every doe I've bred so far this spring has kindled, though several first timers scattered their litters and had to be re-bred as a result. This week a purebred litter arrived out of Zaragevna (her first), Zsa Zsa had a litter of F1 SA/FA crosses, and Esperanza gave birth to two purebred babies two days ago (also her first litter). Evita had a purebred litter of six, and Gypsy had a litter of 9 which she unfortunately lost when they were scattered on the wire while I was away at work:(. Esperanza's tiny litter has been fostered to another doe and she has been re-bred, and Gypsy has been clipped again and will be re-bred as soon as I can get her to cooperate with her chosen boyfriend, LOL.
This week will mark the typical daily chores along with more juniors (especially Giants) being sheared down, and I will also be replacing all footboards, feed dishes, and water bottles throughout the barn. It is a thrill to be able to work longer into the evening now that the daylight hours have increased, and the bunnies have been very happy with the mild weather we've been having in the 50's and 60's, especially the nice cool nights:-).
More again next time and have a fabulous week!
Posted by Anonymom at 1:20 PM No comments:

It was nestbox cleaning day last week (these babies have since gone into the cage with mom full time), so I decided to take pics of the first phenotypic Satin litters that were born here this spring:).

I bred a purebred Satin buck to two SA/FA crosses, and the resulting two litters are shown below. The first breeding was between a red (purebred) buck and a Fawn crossbreed, resulting in 3 Fawns and 4 Reds (first two pictures).

Some different things I noticed about these babies as compared with French litters, is that their colors can be much harder to determine, LOL! I am not as familiar with SA colors so this doesn't help, but an unexpected factor that turned up was the fact that the reflectiveness of an SA coat can make it difficult to identify color, particularly in the beginning. For ex. a baby that seems Fawn in the beginning may begin to look like a Tort when turned in bright light, and colors that are very obvious on a French from the beginning do not seem to pan out until much later on a Satin. Of course, this probably changes as one gets used to identifying them, but the shine does seem to throw things off:).

Also, it seems that this is a breed that probably doesn't show well in certain colors. While (virtually) every color that is showable on a French is showable in a Satin, the Satin sheen just does not seem to display well in certain varieties, therefore it would be hard to obtain maximum show results with just any color. When you break down the points for the SA coat in the standard, Density is still the most important characteristic at 20 points, followed by Texture at 15, Length at 10 and Sheen at 15. Also, a complete lack of sheen is a DQ.

Obviously anything in the Wideband category shows well in this breed. Red is a wonderful candidate to show off sheen and brightness of color, and this would probably include Tort and maybe to a lesser extent, Fawn. I could see where the Self colors would be difficult to get a lot of Sheen on, but I think Agoutis would do fairly well as the Chestnuts and Coppers in particular have enough Orange/Red in them to show well, provided the ring color is crisp and well defined.

The Reds in this litter have great sheen so far but the Fawns, not so much. Originally I thought one of these babies was a Tort but it is becoming harder to tell now, and it may simply turn out to be a Red with lots of smut:). 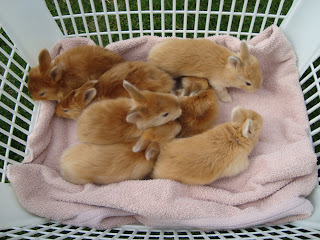 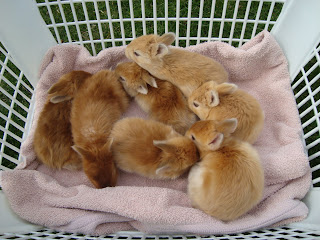 The second litter born is shown below. The dam of this litter was an FA/SA Chestnut cross, and the sire was a purebred Red. In this litter we have what is clearly a Chestnut, an Opal, a Red, a Fawn, and what I originally thought was a Chocolate Agouti but which I am watching closely now because it is getting more coppery by the day, LOL. Since a Copper must have black ear lacing, etc. I am inclined to think it is still a Choc. Agouti because the tipping is definitely brown, but we will see how things go and develop over time. 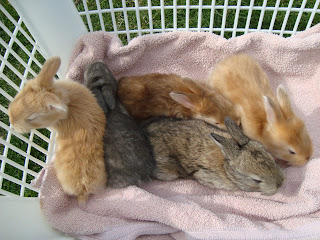 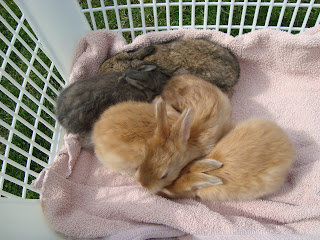 And this last picture here is of a purebred French litter that I included for the sake of comparison. There are (clearly and VERY obviously, LOL) 3 REWs and 3 Torts, which in FA litters are discernible by the second or third day at the latest. Also, since my FA herd is very linebred at this point I can predict with almost 100% certainty what colors each pair will yield, so this helps with identification as well. Another interesting thing to note in a French litter vs. a Satin is the difference in texture, readily observable as well. Here the Satin babies obviously have much finer wool as it lays down and 'crumples' much more easily. The French, by contrast, have much 'starchier' coats that do not look so 'tousled' and are clearly not as fine. 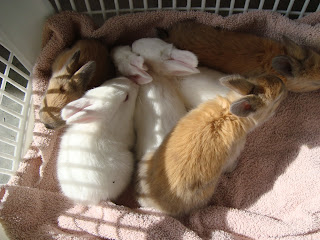 Anyway, tomorrow I am headed off to the Rhinebeck show (my local club show) where I will be a Registrar again
More again next time, and hope everyone is having great luck with Spring litters!:-)
Posted by Anonymom at 3:47 PM No comments: