It looks like I have finally managed to get things together here and post pictures of last week's show:). Below are mostly pictures from Show A where Cheryl Eng-Link was judging. The NY Convention typically has some of the highest angora entries in the state, and most of the people standing at the table here were entered with one breed or another: 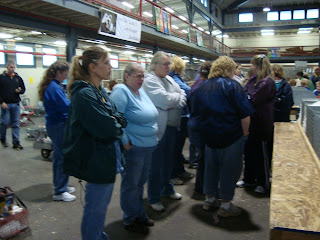 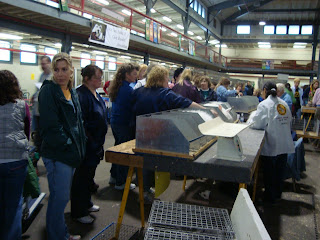 Here is either Carmen or Evita sitting out on the table, awaiting judging: 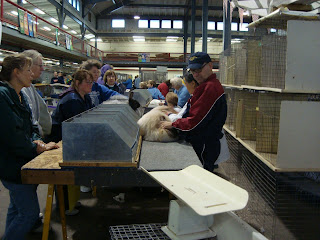 And this is Zsa Zsa during the judging of the White class: 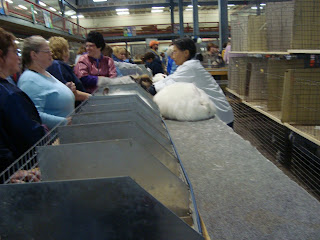 This is the YOUTH FA show, with rabbits owned by a little girl named Meghan:). 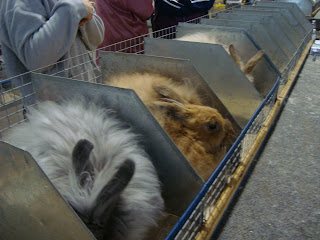 These are my buns in their carriers, awaiting the second show: 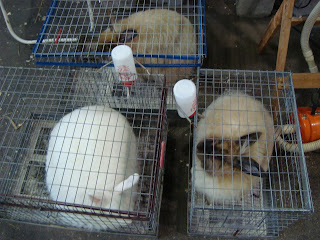 And these are some of Zsa Zsa's 'formal' pictures, taken at home after the show:). She is still holding a prime coat now and probably would have made it to Convention, but unfortunately it is not to be since she will be getting bred and retiring soon to the nestbox instead, LOL:). 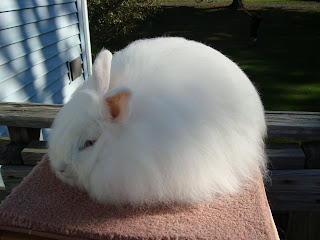 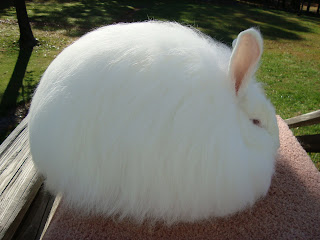 Next weekend I will also be attending the Rhinebeck Sheep & Wool festival, so if anyone is interested in some sale bunnies for delivery to the event, please email me ASAP at amy@spangangoras.com. There will be several Torts and REWs available:).

NYS Convention and Reserve in Show

I have some pictures I'm going to post in a few days once I get this camera thing worked out, but for now I figured I'd post the results of a show I went to yesterday (Sat, Oct 1):).

I hadn't planned on attending the NYS Convention this year because A) for some reason I thought that there was only one Open show planned per day (which later turned out to be wrong, LOL), and B) I was planning on attending the DelMarVA show the previous weekend instead. Well, the DelMarVa show didn't quite pan out because of flooding here (again!), and later it turned out there were 2 Open shows on Saturday in Syracuse, so I decided to head over to try to squeeze in at least one show for this season:).

I brought 3 Sr. does along: Spang's Zsa Zsa, Spang's Evita, and Spang's Carmen, and the two shows were judged by Cheryl Eng-Link and Helen Brose, respectively. There were 33 FAs entered in both shows and 6 exhibitors.

Zsa Zsa took BOV/BOB for both shows, and Carmen won BOV Colored for both shows. Evita placed right behind Carmen in the Colored class in the second show, and I think she did it in the first show also, though I wasn't writing anything down and can't quite remember the details (apologies to anyone in case I'm wrong!:( )

In the Best in Show competition for Show B, Zsa Zsa also won the Open RIS on a very competitive table, and overall she had a wonderful, excellent day:). She earned her 7th leg and will now come home to be sheared and bred along with everyone else for the Fall litters.

Today I am getting ready for the kids to arrive home after their l-o-n-g vacation:). Though I got a lot done and it was great to have an uninterrupted break, it will be wonderful to see them again and get back to the daily madness that is normal life in the Spang family household. LOL.

Pictures will be posted in the next several days----have a great week!:-)
Posted by Anonymom at 6:08 AM 2 comments: