It looks like coats for the Spring season are really starting coming in now, which is making it necessary to have marathon grooming sessions every weekend just to keep everyone neat and presentable (especially those bucks:( ). I have to say I pine for the day when I will be able to remove these silly crocks and put my handy dandy water bottles back up. Trust me when I say that it is no fun spending 45 minutes grooming a doe only to find her standing in the water dish when you come back into the barn to get everyone fed later on--grrrr!

The warmer nights now have left everyone with unfrozen water all the time so everyone has been eating and drinking very well. The first show of the season is going to be in Hamburg PA this year, so if everything goes well (knock on wood, cross fingers and hold breath), everyone should have 4-5 inches of dense growth piled on and be very ready to compete.


The babies are looking good, and I will be starting a new wave of Spring breeding this week also. I took a few bunny pictures here to post.


This beautiful baby below is a Sable F4 Cross doe out of Kimba and Giacomo. She has fabulous depth and color right now, but as with all crosses I'll have to wait and see how the Senior coat turns out. It is absolutely wonderful to have Sables in the barn again. I am going be working my tail off 24/7 from this point forward to make sure they stay for eternity, LOL. This little girl is 11 weeks old:). 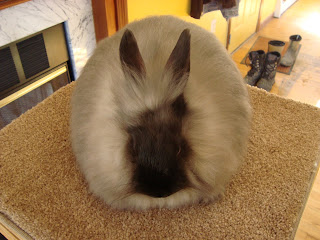 The next photo is of one of my newest does, Spang's Bijou. Bijou is a daughter of Devaki, a doe I had who consistently gave me 10 oz. per shearing, and I am positive that she will do the same, if not more:). Here she is in her first senior coat (about 2 inches so far), and below her picture I tried to take a closeup of her wool which shows the quality of texture she is already displaying at 8 months. This is an example of one of those cases where the body is not perfect (Bijou's type falls off over the loin), but it was necessary to keep her anyway because one of her other parts exploded off the map, LOL. I will be bringing this doe to shows but how she does will depend on what type of judge she gets. A meat judge will place her lower than other entries without a doubt, but a wool judge will shoot her up in the ranks, possibly even giving her top placement. This rabbit is so dense that I probably will not be able to brush her in another month. I think I will end up using the blower with a touch up afterward with the slicker. 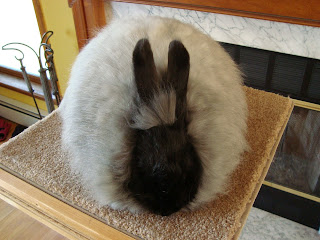 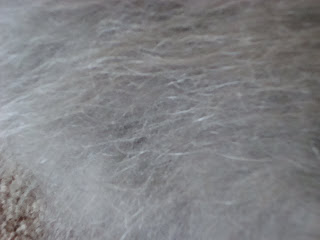 Anyway, hopefully everyone is getting through the end of the winter alright and we are all dreaming of spring and planning our next breedings:). Have a great week and see you again next time!
Posted by Anonymom at 7:13 PM No comments:

Here are some pictures taken by my mother Lesa during the Sat. PA Show. Most of these are of only one show (the morning Open show) because later that day and on Sunday Julie and Pam took over the photography and took pics which will show up on the UARC website and the UARC Newsletter later on.


The first shot here shows the conditions at the hall parking lot on Saturday morning as everyone was attempting to get into the show: 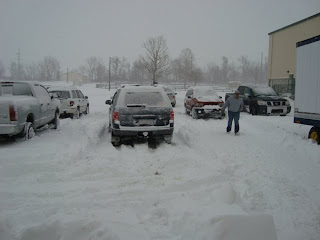 This second picture is of Janet Gruber and I behind the UARC table. Janet is busy setting up the raffle as I am filling out entry forms, etc.

This is the wool room and grooming area as it began to fill up on Sat. morning:

These next photos below are of the first Open show with Roger Cota judging the French Angora class: 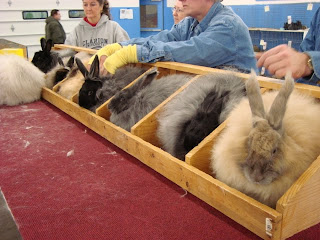 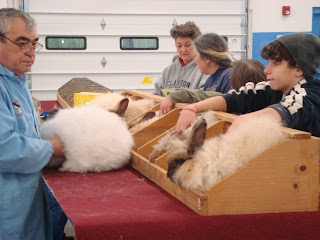 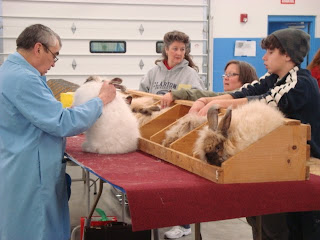 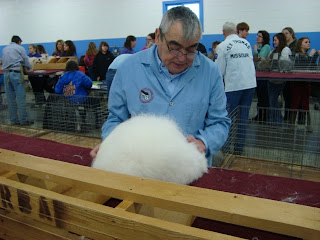 And this is a picture of Jenna (left) and Lorie (right) holding their bunnies and waiting for the White Sr. does to be called: 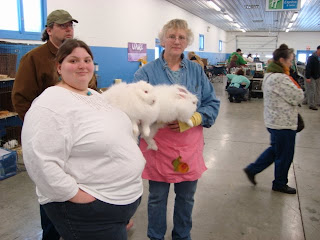 This is Janet again, writing for the same Sat. Open show: 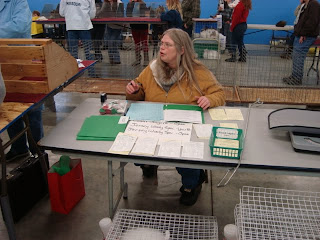 And this is another shot of one side of the grooming area. Fortunately the circuits only overloaded once the whole weekend with everyone blowing their animals out this year. Last year with more exhibitors in the room the whole thing shut down several times from what I remember. LOL! 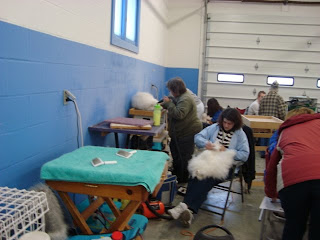 Again, I'm sorry for the lack of photos covering the entire weekend, but the other ladies took many more which I'm sure will surface shortly on the UARC site. Despite the weather this year the Convention was a very exciting show and I'm sure we'll be ready to do it all over again in 2011 (Big Grin!)

Have a great week:)
Posted by Anonymom at 6:39 PM No comments:

After a long week and weekend I am finally getting around to posting again, LOL.

We arrived home yesterday from the PA Convention, where the Lebanon, PA area got hit with a snowstorm that left close to 2 feet in some places by Sat. morning. We got in on Friday afternoon around 3PM, and left around 4 on Sun. Unfortunately I plugged my camera battery into the wall at the hotel to recharge and then promptly forgot it the next morning (LOL), so now I have no pictures to add to this post until my battery arrives in the mail, where the hotel people so graciously agreed to put it today:).

Basically there was a severe shortage of entries in every show both days due to the weather, so numbers on the tables were much lower than usual. For my own part I did not enter any rabbits at all, but that was because I had no one in the barn above 3 inches of growth, and I was not ahead of myself enough this year to be sure I had Seniors bred and juniors produced at the right time:(. Clearly I will need to get my tail in gear over the next couple of months and plan breedings to produce rabbits who are in coat for next winter, but as we know angoras are all about timing, timing, timing:-).

The UARC held two specialties at this show, and the results of Sat. and Sun. were as follows:


The Open show results are not all known to me since I was busy elsewhere and on Sun. I wrote for the specialty at the same time as the Open was going on. There were also Youth shows happening both days that I did not get the results of (unfortunately), but I understand that the Youth BOB French Angora went on to take Youth BIS on Saturday, and that is quite a feat considering the level of competition usually present at this show.

Linda Cassella took Open BIS with a Colored EA in the Sat. show, and I believe the Open BIS on Sun. went to a Satin (short-furred breed).

Overall this was a very exciting weekend despite the weather. I'm sure next year will be better since the last time they had a storm like this in Lebanon it was 1922 from what I hear, LOL! There was also an incredibly interesting perspective given by the judges of our two Specialty shows, Scott Wiebensohn and Dave Cardinal. Scott Wiebensohn is a Brittania Petitte and English Spot breeder from the west coast, and he had some very interesting points to make about bone and balance in a rabbit. He told us that every part of a rabbit is proportional to all it's other parts, so a rabbit with extra long ears (for ex.) will also have a longer-than-average face. A rabbit with long shoulders is also more likely to be longer than usual in other areas such as the back feet, etc. Aside from gauging bone quality by wrapping your hand around a front leg, he said that another good measure is to flip the rabbit over and observe the width of the back feet across the hock area. He said that bone quality can be evaluated before a litter even leaves a nestbox this way. Thinner boned animals tend to have feet that are longer and narrower, while better boned specimens have feet that are short and broad.

Scott W. is also a spinner so he paid special attention to wool quality, and he was very open to comments from the breeders afterward:).


In contrast to Scott, Dave Cardinal (the judge of our second show), was a hard-core, serious meat judge who specializes in New Zealands and Satins. His perspective was vastly different from Scott's but also incredibly educational, because he talked more about musculature and the importance of a good loin and lower hindquarter. He stressed the need to FEEL your animals without necessarily looking at them to gauge type and bone quality. Compared to Scott who was a very visual judge (due to the need to visually assess the balance of an arched breed), Dave was almost completely tactile, relying nearly 100% on his ability to feel the meat condition and type traits. Both judges were incredibly different but very good, and it just goes to show how people interpret things in different ways, and how the breeds you raise can shape your perspective and even your method of evaluating other rabbits!

Anyhow, there were tons of people to see and meet at this show (as usual!), but it was also great to come home and get back to my normal bunny routine with my own rabbits (that is, until the next show comes along:)). Hopefully the cold will let up soon, temperatures will even out, and it will be far easier to keep the herd on an even keel of eating, drinking, and wool growing. All my litters are now currently weaned, and I am planning on breeding more does next week and over the weeks to come.

More stuff next time (with some pictures hopefully!)