I finally got the chance to snap pictures of most of my Giant/cross keepers from this summer's breedings. These babies were all born in the middle of July and are now about 4 1/2 months old:).

This here is BOCA, an FA/GA cross. She weighs in at 7 lbs. so her bone/frame is good, but her wool is typical of what you might see in a crossbreed---lack of balance and a very high maintenance coat as a result. Surprisingly, the FA/GA crosses are proving far harder to keep matt-free than the NZ/FA/GA crosses. I will need to breed toward the easiest care coat possible that still maintains a correct ratio of GH to underwool/awn fluff. 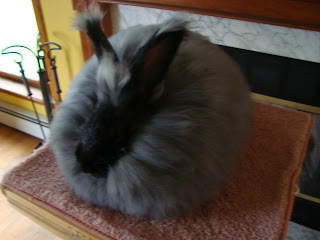 This is DAFFODIL, the Chocolate littermate to Boca. I have said before that I am not wild about the color Chocolate because it has never been very dense in my experience, but since this girl has big bone and has already passed the 8 lb. mark, I am keeping her around. LOL. 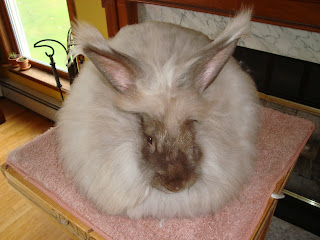 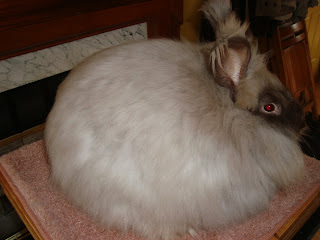 These are the two boys out of Marin, DOMINO and OLIVER. They are not as large as the other rabbits, but their weights are still respectable and they have very good type. 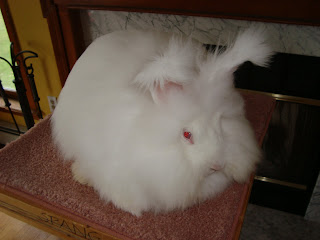 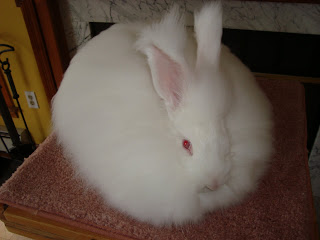 And this is the best (cross) baby that was born this year. MARLEY is very large for her age (around 8 lbs.). She is typey and well balanced. Her wool is dense and easy to care for, and she feels like a lead weight when you pick her up *grin*. She is also out of an NZ/FA/GA breeding. 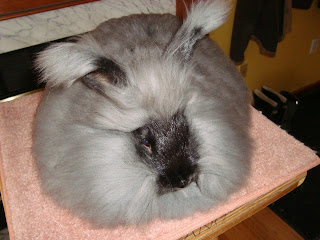 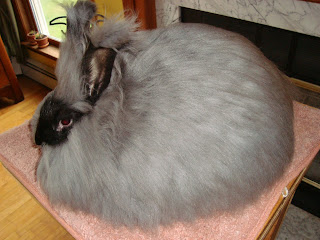 And this last picture is of Soraya, a black FA out of Etienne and Diego who is also 4 1/2 months old. This is a beautiful little girl who should do well on the show table next year:). 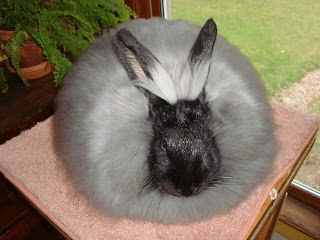 These buns only represent the first GA breedings I have done so there will be lots of work to do in the future. Since the real work in breeding is to isolate the best qualities of a herd and make them repeat themselves again and again, it will take many years and many generations to get the animal I want that can be produced the way I want it over and over the same way. Just as it is with French Angoras or any animal anywhere, each person's herd is like a signature that is refined and developed over time. Lots of work, lots of time, and lots of fried brain cells , LOL.

Just a quick picture this week of my junior doe Evita, who is nearly 6 months old now and got her first haircut today. Evita was my best baby born this summer, and she is looking forward now to the 2011 show season:).

I've got loads more grooming to do tomorrow and this week. Keeping up with 2 breeds is a LOT of work, (LOL!) and I have recently come to the conclusion that I am not---just not---a Furnishings Person:(:(. I completely understand that there are people who are completely devoted to fluff on ears, cheeks, foreheads, and feet and I would never want to insult those fabulous people, but unfortunately I will never be one of them because I love the practicality of clean ears and faces too much, LOLOL! 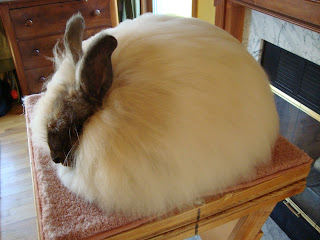 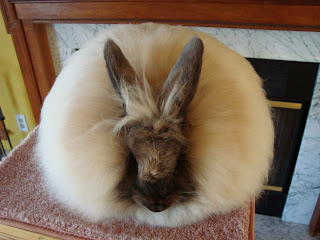 Anyway, more again next time and have a WONDERFUL Thanksgiving!:-):-)
Posted by Anonymom at 4:38 PM 2 comments: 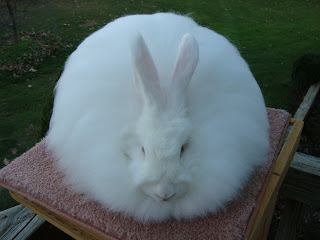 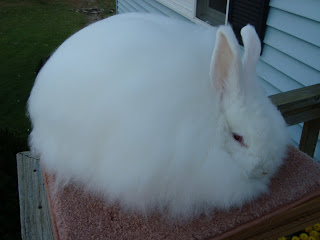 --This is another post from the old blog, but since I groomed a lot today I decided to also include pictures of Spang's Zsa Zsa, a REW doe whom I've been growing out to extremes to see if she can eat a full ration all the way to harvest. Since she has NZ in her (she's an F4 cross) I wanted to be sure that there were no issues with woolblock before breeding her. As of today, she is wearing a 6 1/2 month coat and I am thrilled to report that she is cleaning her dish everyday---YAY! More stuff again next time:-)


Lots of people, particularly newer breeders, are often unsure of the best way to handle, pick up, and carry a rabbit. Different people have different methods that are used for pets, showbunnies, and angoras wearing showcoats, but here is a list of the typical do's and don'ts when it comes to running rabbits around in general:

DO's
-Keep bunny nails neatly trimmed to avoid getting them ripped out on the cage floor and to keep from being seriously scratched by your rabbit.
-Let the rabbit know that you are ready to pick them up by talking to them first and making them aware of your presence (no surprises, in other words!)
-Place one hand over the head and ears/neck of the rabbit before lifting it out of the cage, and slip the other hand under the belly so as NOT to be lifting the rabbit out by the head or scruff of the neck. Placing your hand over the head is only for restraint purposes, never for lifting.
-Use a stepladder to remove rabbits from top cages so that you are not forced to drag a rabbit forward in order to get it out.
-Always LIFT, and never PULL a rabbit out of a cage whether you are taking them out backwards or forwards.
-When removing a rabbit from the cage who is facing backward, place one hand over the head and the other one under the belly and lift the rabbit out backwards. If you cannot get one hand on the head then slip it under the belly/chest of the rabbit right up to the front legs, hold them firmly, then use the other hand to grab the rump of the rabbit and lift it safely out.
-When taking a rabbit out of a cage who is facing forwards, wrap one arm around the side and rear of the rabbit, and the other directly under the rib cage and lift up.
-Once you have a rabbit out of a cage tuck it into the crook of your arm like a football (facing backwards), and hold it against your body firmly.
-When placing the rabbit back into the cage try to do it backwards to avoid tripped/torn toenails. Reverse the hold you used to take the rabbit out of the cage facing frontwards and place one hand under the chest with the other hand grasping the rump. Lift the rabbit into the cage backwards and place it down on the cage floor.

DON'Ts
-Do not ever sneak up on a rabbit before picking it up or touching it. Always make sure he/she is 100% aware you are there to avoid sudden bolts and possible spinal injury.
-Never pick up a rabbit by the ears, head, or scruff of the neck. Repeated lifting of the skin over the neck can cause it to actually become permanently separated from the meat. The resulting flabbiness/fattiness will make it impossible to get the rabbit into show condition, and performance will suffer as a result.
-Never drag a rabbit out of it's cage. Instinct will cause it to dig it's nails into the cage floor and resist the motion, resulting in broken or ripped out toenails.
-Once a rabbit is out of it's cage, never carry it like a briefcase with the legs dangling. This is almost a sure-fire recipe for spinal injury, and one that should be avoided at all costs.
-Never hold a rabbit away from your body unless you have a very firm grip on the chest and rump of the rabbit. Any position of 'dangling' or flailing will greatly upset a rabbit of any breed, and if they must be held out they must be held firmly enough so that they feel secure and do not kick or panic.
-Never grip a rabbit's hind legs together to stop it from kicking. It is not natural for rear legs ever to be touching one another, and if a rabbit should panic or try to escape in this position both legs could break.
-Never move quickly around rabbits. Never grab them roughly, severely, or suddenly, and never surprise them from behind or above. Remember that calm bunnies are much less likely to injure themselves, and much more likely to let you handle them when they trust you to keep them safe:).
Posted by Anonymom at 5:44 PM No comments:

It has been really, absurdly busy around here since I went back to work (for the most part) full time. There has been hardly any time to do dishes, feed children, take care of animals, or clean the house I live in much less blog and check email, LOL. It has been an embarrassing couple of weeks I tell you:).

There are a couple of days off coming in the district I work in, so I will begin to try catching up on normal life. Several new bunny litters arrived this week which I will be updating to my website. Juno had a litter of 3, Diana had 9, Bijou had 7, Etienne had 5, Elenita had 2, and Natalya and Marin are due with litters tomorrow. I have noticed lately that Fall litters often tend to be smaller than the Spring ones, and I am sure this year it is directly due to the horrible summer we had and the fact that my bucks (especially the older ones) went completely and totally infertile for a period of several weeks:(.

These new litters will be 12 weeks old by the PA Convention (which is exactly why I bred them at this time, LOL). There should be plenty of babies to bring for sale even if they are too young to place on the show table yet. I am looking forward to seeing how they turn out and also how the latest Giant litters turn out, of which two more are due to be born this week.

Speaking of Giants, I managed to acquire 3 more purebred bunnies from a very nice breeder in PA named Ashley Shaw. She sold me a beautiful little doe along with a nice buck and a purebred Black buck, and I am thrilled to death because now my GA base herd is complete and I can really get to work with a decent sized gene pool in place. The GA crosses I saved from my last breedings are really coming along now, and at the last weigh-in they either equaled or exceeded my French litters of the same age. Of course, much of this is due to hybrid vigor which can be expected to wear off in the next 2 generations, but it's a good start and the buns I am holding onto are strong, hardy representatives of the breeds that were used.

Aside from this there is really nothing going on besides the usual closing up of the rabbitry for winter and preparing to break out the water dishes for everyone. This week (as everyone knows!!) is ARBA Convention week up in Minneapolis, MN, and I think the judging should have finished up by now and we will soon be awaiting the results of the show. From what I understand there is actually a larger Satin Angora entry than FA this year which is utterly amazing. Years past have seen well over 100-150 French entered at that show, but apparently there are less than 40 entered this year:(. I have heard rumors that the Pennsylvania clubs are planning to put in a bid for the 2013 location, and if that is the case then I will certainly plan on driving down and adding my numbers to the bunch. There is nothing like an ARBA convention to look forward to--the biggest (rabbit) show on earth!:-)

Anyway, more again next time when I have time to snap and post pictures. Best of luck to those traveling to and showing in MN this week. Have a fun week and get home SAFE!
Posted by Anonymom at 7:14 PM No comments: