This was an extremely busy week that just ended with separating the oldest litters out into separate cages today and slipping nestboxes in with 4 does that are due next Wednesday. Breeding season is clearly in full swing, but it is peppered with shows and all sorts of other activities in between, making life a little more hectic than usual:). Last Thursday I did an Angora presentation for the local spinning guild which was alot of fun, and then on Saturday I went to the North Haven, CT show, while today was spent cleaning the barn and grooming/evaluating/separating babies.

I meant to take pictures of the show this weekend to post but as soon as I pulled into the fairgrounds I realized that I had left my camera on the kitchen counter:(. As a result, the idea of photosnapping was nixed, LOL. This show was one that I had never before attended but decided to give it a try because it was only 2 hours away, but it was a single show and there were very few angoras in the building---only about a dozen FAs and 3-4 exhibitors. I did get the chance to talk to alot of interesting people about their breeds, there were 3 Belgian Hare shows going on and I enjoyed watching them and talking to their breeders, and I also had a long talk with Paul Becker who is the CD holder for the Amber (Standard) Rex.

I attended this show because Oomi was in full coat and I didn't want to waste it (LOL!), but I also brought my two REW juniors out of Sadako who were used as fillers I'm afraid, because both bunnies are past baby prime and need to be sheared, and I had no idea who else would be entered:). The judge for our table was Bob Shaftoe, and Oomi earned a BOB and her first leg under him, while the BOS went to Nancy Platte with a CSB. There is another show in Harford, PA in approx. 2 weeks that I may try to get to if Oomi can last awhile longer. She has been slowing down with eating lately and I have been giving her extra hay and dandelions to keep her appetite up, but we will see how it goes and if she can make 1-2 more shows before the coat comes off.

Also, the big excitement today was that I took my oldest litters out for grooming and first evaluations, and I was thrilled with how the majority of this bunch looks so far:-). Juno's, Pascha's, and Echo's litters are all 8 1/2 weeks old right now, and I took several pics of them here and there to post tonight.

Juno's 4 babies are beautiful, and I am especially thrilled because there is a fabulous Tort buck in her litter along with a really good Sable Pearl (who also happens to be a buck:)). I took pictures of both below, but for some reason my camera is putting a funky yellow stripe in my pictures lately, and I am hoping that it is not about to bite the dust as I speak--argh!!:(:(. 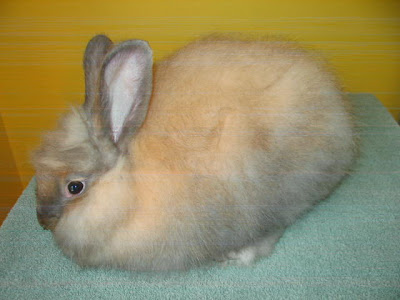 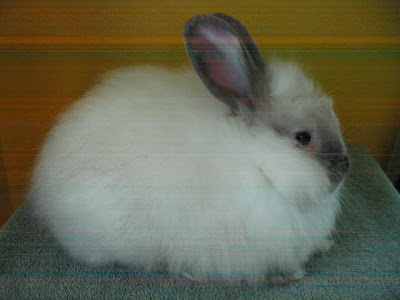 This is a Tort doe from the same litter, also with wonderful wool. Aren't those little helicoptor ears cute?? 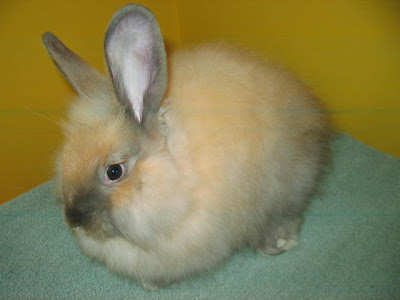 And this is a Fawn doe from the same litter as well. She is an active little girl who only sat still ONLY ONCE (just long enough for me to take this picture:)), and then said, "The heck with this. Go find some other unsuspecting baby to pose". 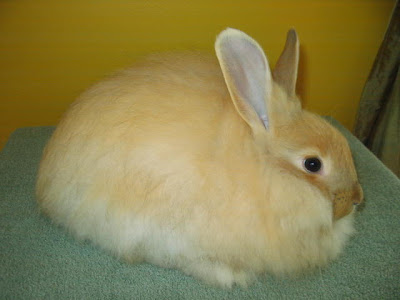 These are the 2 Sables that I fostered over to Pascha who also got their own cage today, originally out of Echo and Pierre. Below is the buck who is the better of the two and you can see that he has GREAT wool and color, although both are large and unusually well-boned. One of these bunnies will go to Elaine Harvey as a trade for CCR's Echo, the F2 doe who was their dam, and one will stay here to perpetuate a fabulous, all-Sable line:):). 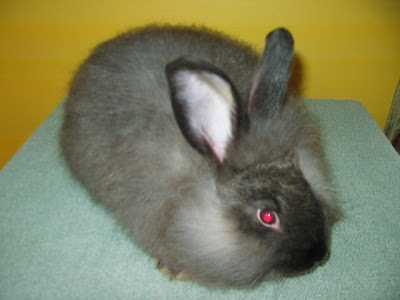 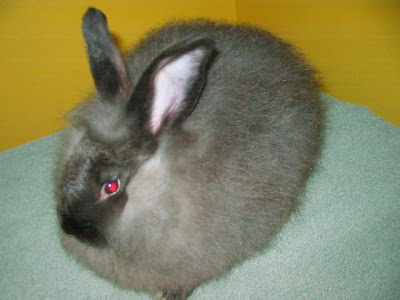 This is the little Sable doe: 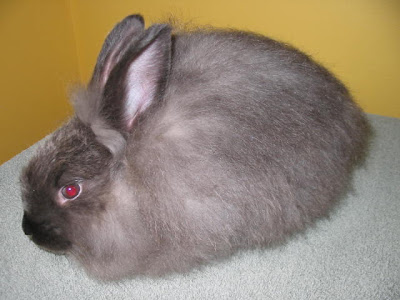 Next are two pictures of bunnies from Pascha's litter. This is a Black doe with very good, rich color, and below this is the pick of the litter, a REW buck (who unfortunately looks as though he is about to roll over or so, LOL). There is also a Fawn doe in the bunch who looks promising, but she was not cooperative on the table today, so I will save her for another time. 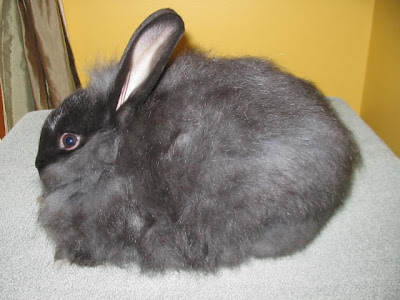 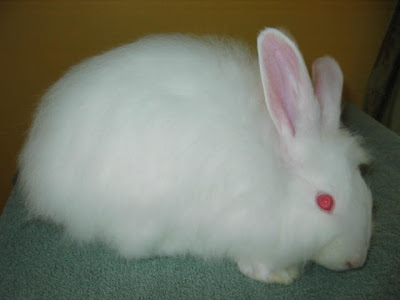 Here are just a few more pictures of babies from Echo's litter, which I have to say turned out absolutely WONDERFULLY. I have definitely decided to repeat the breeding--these babies are HUGE with incredible bone and wool, and one doe in particular seems to have inherited her mother's precise type, while several others are not that far behind:). These results are very surprising to me because I used a buck on her this time that was inferior to the first one I tried, but obviously it was a better fit genetically and the parents have thrown good qualities in more than one baby. Below is a Sable Pearl doe, a nice rabbit with great density at 8 weeks already. 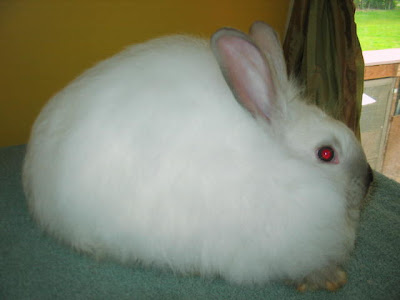 And this is the pick of Echo's litter, an absolute carbon copy of the doe typewise who seems blessed with her sire's great density on top of that. I am dying to see how this girl develops over the next several months. If she stays this solid and grows a nice senior coat, she will make an excellent showrabbit indeed:-). 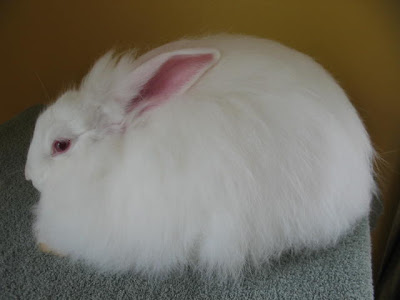 And this is one more picture of another doe from the same litter, also well- typed and with a good bit of wool: 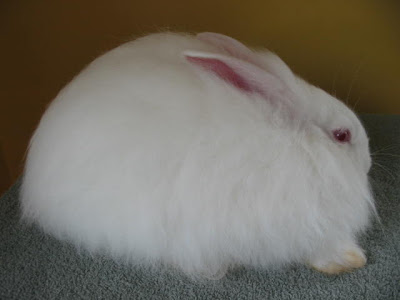 There are two more litters in the barn who are still too young to check over at 7 weeks, but there are bunnies in both who look promising so far. Also, there are 4 does due with litters this week and it looks like all are pregnant (we hope:)). Devaki has been bred to Dijon, Neva was bred to Dijon (not a compatible breeding colorwise but unfortunately there were few options in her case), and Nereida and Sadako were bred to Pierre.
More again next week when life is calmer and there are new litters to report. I will leave now with 2 last pictures of chicks that our kids put outdoors into the main coop today. Since the mink invaded our henhouse and left nothing but carnage last winter we were forced to order a whole new batch of chickens this Spring. Hopefully they will last longer than the first ones did:-).
Have a wonderful week!! 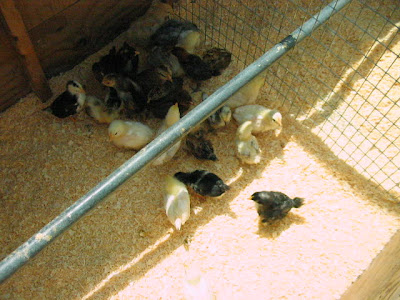 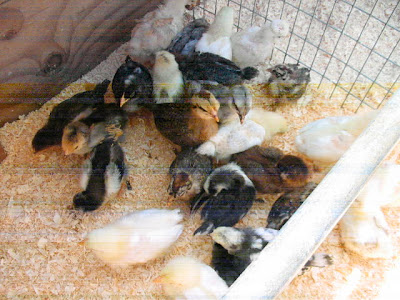