Yesterday I went to the Long Island show in Old Bethpage (for the first time), and it turned out to be a very nice place:). There were few FAs and EAs entered (no SAs or GAs) and the show itself was small, probably because you had to drive through the city and onto the Long Island Expressway in order to get to it, LOL!

It took place in an old Restoration Village, and the building we were housed in was GORGEOUS. Here is a picture of how it looked on the outside: 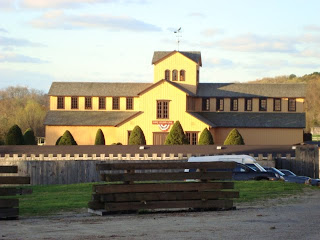 This is how it looked like on the inside. NICE, huh?? 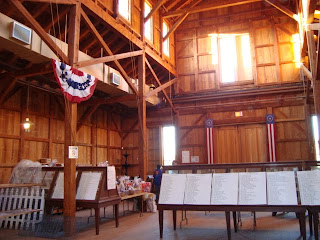 This was the hall as it was filling up with exhibitors in the morning: 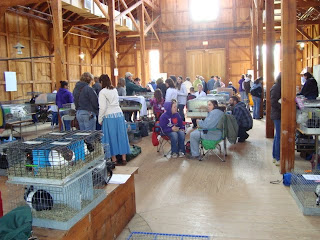 And these are some pictures I snapped of Carmen and Bijou while I was grooming: 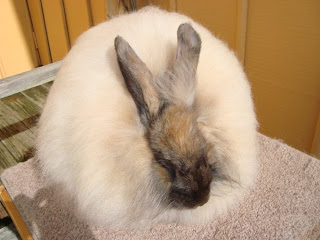 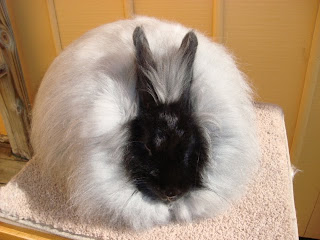 There were only 12 FAs entered in both these shows, and the judge for the first was Donna Grimm (a member of my rabbit club at home who recently got her license:)), and the judge for the second was Bob Shaftoe. In show A, Spang's Diana took BOB with a buck belonging to Aileen Brown taking BOS, and in the second show, Spang's Diana took BOB and Spang's Anton took BOS.

Here is a picture of Donna Grimm judging: 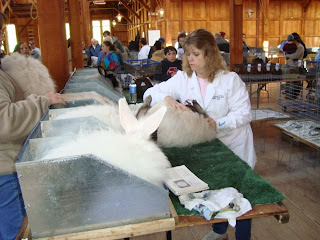 And here is Bob Shaftoe: 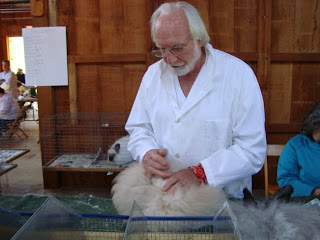 One fabulous thing about watching Shaftoe judge is his extraordinary understanding of FA wool. Few people know this, but he has been a judge for 40 years and was one of the people who actually helped write the FA Standard. Something he does that practically no other judge attempts is to examine the structure of wool from the base of the hair shaft all the way up to the tip. He comments on density, density on the back, sides, and underside of a rabbit, overall evenness of density, and density as it relates to the precise stage a coat is in on that day. He examines the coat to determine whether the guards are the proper length as compared to the underwool, what type of crimp the coat has, whether a coat has the right amount of crimp to balance itself, and whether the crimp is tight enough to support the weight of a prime coat and give it body, strength, and form.

One fascinating distinction he made during the show had to do with degree of crimp in a coat. He said that if a crimp pattern is correct (the degree of 'zig zagging' is ideal) then a coat should have just the perfect amount of lift, prime texture, and condition. The gap between the length of the underwool and length of the guard hair in a well-crimped coat should be no more than 1/2- 3/4 inch, and if the crimp in a coat is LOOSE (or too relaxed, or non-existent), then the coat will not have proper strength, but will be flat and hang straight down off the rabbit instead. He said that a coat in the slipping stage will have this quality as well.

A 'slip' in an angora coat is defined as relaxation of the crimp pattern (in the underwool) of a mature coat, so that it ceases to support itself and literally begins to 'collapse'. You can see this very clearly in a French coat (and maybe the SA coat too) because the unique oval shape falls apart and becomes less distinct. As a slip advances further, 'scales' on each guard hair open up and cause a rougher appearance, and the shine associated with prime condition (where the scales are lying flat and reflecting light), also disappears. From that point the coat matts up as the open scales begin to stick to each other, and a little while later the hairs release from their follicles in a full-fledged molt.

Some other interesting points Bob mentioned (it is always a great to pick this man's brains at a small show, LOL!) is that the first place adult guard hairs begin to show up in a junior coat are at the tops of the back legs and around the base of the tail, HQ, and lower stomach. Also, the more furnishings an FA has on it's ears and face, the softer it's adult coat is likely to be. The amount of adult guards a French has is directly proportional to how clean it's face and feet will be.

I was very interested to see what Bob would have to say about my doe Bijou, whose coat is racing in but is still unfinished. I said earlier on this blog that I thought she had one of the best coats I've ever bred, so I was gratified to hear him say (after a thorough and lengthy examination, LOL) that her crimp was the best he's ever seen on an FA. (BG!)) She won BOV Colored and didn't manage to go much further, but I am glad to know that her coat is one that I can encourage in future breedings and spread the quality of to other areas of my herd.

Anyway, so that was how the weekend went. The Rhinebeck show is coming up next week, and after that I think we will be finished and the majority of my show string will need to be clipped down and bred. Last week 4 litters were born to Etienne, Marin, Yvonne, and Natalya (8,7, 13, and 11 babies respectively), and there will be more on the way as everyone else gets bred and the breeding season takes off:-).

Have a great week and enjoy this spring weather. May all your does be bred and your nestboxes be full!
Posted by Anonymom at 10:55 AM

Thanks! I'm glad you like the info. I enjoy finding it and writing it down for all angora people to use, LOL:-)

I love Bob Shaftoe as a judge, I fell for him at my first show in Fulton last year. You could just see how knowlegable the man was and I loved how he took his time judging and is meticulous about going over the animals.
I have had him a couple of times now and he is never a disappointment to get as a judge!
Loved reading about the crimp.
In my own bunny barn I have been really paying close attention to their crimp for a bit now.
Did he happen to say anything about how seeing outstanding crimp in a Jr. will corespond to what their Sr. coat might be like?
I'm curious if you can predict good adult wool specimens by looking at the structure of the individual rabbits baby coat.
Obvously you cannot go on texture because of that cottony baby coat, but I have to wonder if good baby crimp = good adult crimp.
I heard you did a BIS ;-) Lets see some pics woman! lol

Actually it is very hard to predict the quality of an adult coat based on the baby coat unless you know the line well and can reasonably guess what will happen based on related rabbits in your barn. My line has become more uniform the last few years, but before that it was next to impossible to predict what would happen with any rabbit from Jr. to Sr. Some baby coats that were outstanding would suddenly fall to pieces in the adult coat, and others that seemed like they would never amount to anything turned out to be dense, even, and well-balanced. I remember a friend (who has since gone out of rabbits) and I would try hard to look at different jrs. and keep track of predictions about coats over time, but try as we might we could never find any indicator to rely on other than linebreeding over time. You are right that this would be a good question to ask Bob. I'll try to remember it the next time I see him:).