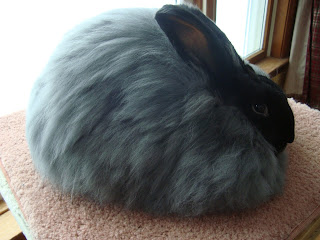 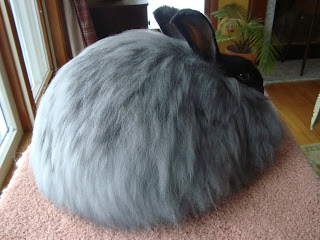 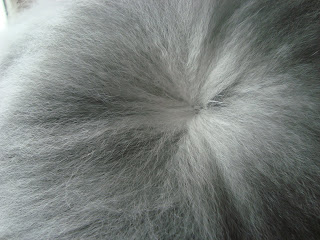 And this is a photo of a black French Angora buck named Spang's Lusaka. He was born around the same time as the bunny above and is an excellent rabbit, but it is clear that he does not have the same wool type as the cross above, and not as much density as the cross at 12 weeks. 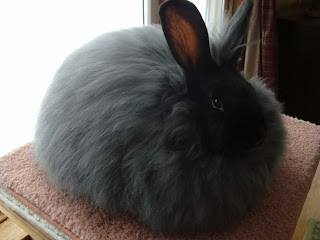 This is a Tort GA cross doe who is also going to have great wool with good crimp and density. I included two wool shots for this one---the first showing the multiple layers of wool coming in as the coat matures, and the second showing the overall texture and crimp of the coat. 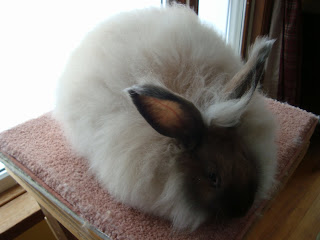 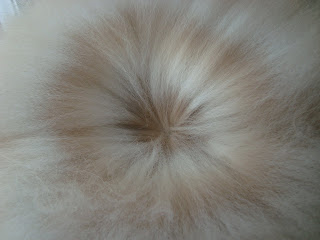 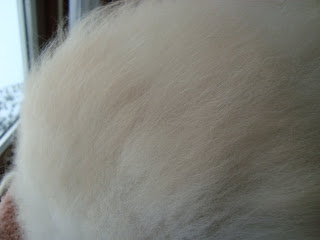 This last photo is not of a GA, but of a purebred REW French doe. This is one of three fabulous REW does that were born in the barn this winter. All have beautiful, smooth type and wonderful wool, and they should be very competitive on the first senior coat. Two of the three girls are out of Spang's Zsa Zsa, one of my best does, and the third is out of Spang's Marin, another REW with NZ blood that produced both the third REW and Lusaka, the black buck. I included a close up of this doe's wool below, and there you can see the classic 'halo' of a French coat that is produced by the gap in length between the underwool and guard hair on a balanced coat. This doe is 12 weeks old as well. 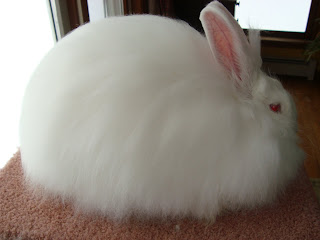 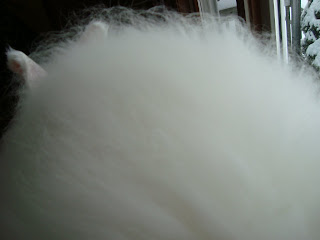 Anyhow, that's about it for now. There will be more pics and stuff again later in between work, spring cleaning, and baseball practice:-).
Posted by Anonymom at 10:11 AM

Your Giants look to be coming along very nice and I loved your very informative post! You are right a blower is going to be a MUST have for showing this breed and keeping up with regular grooming. The furnishing is one thing I really need to buckle down on now that I am getting bigger rabbits with better wool. I tend to like more furnishing but like you mentioned it is not the standard that must adhear to. Looking forward to more posts about your Giants.

I second Dustin's point that you've got to use a blower with Giants. That kind of density demands it. You should probably also try to breed in more purebred Giants.

Hi Dustin (and Jan:)),
Yes, a blower on a show GA is going to be imperative, and I think also a razor for shearing is going to be necessary later on (something I didn't include on the original list). Scissoring one of these things does seem to take forever, LOL.

Jan, I may add more purebreds in later but for now I don't want to risk sacrificing size since I've found that the crosses outweigh the purebreds I've had by quite a bit so far (from several different breeders). I am sure hybrid vigor has something to do with that, but for now I will stay the course and see how it goes, then add in later as necess.